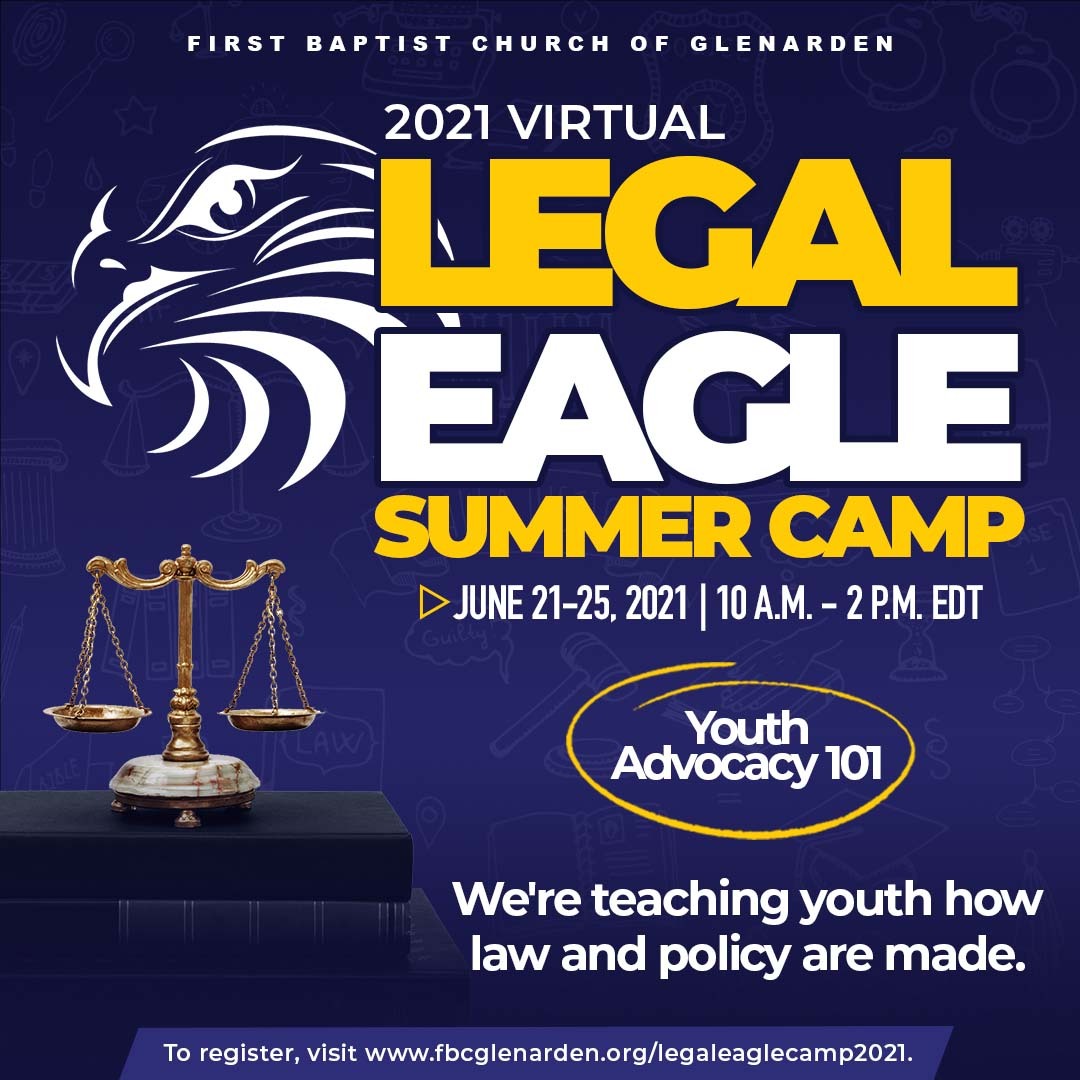 The First Baptist Church of Glenarden’s Legal Ministry presents the 2021 Legal Eagle Summer Camp. The theme for this year is Youth Advocacy 101. This virtual camp will provide youth with an opportunity to learn how laws are made, including laws and policies that affect youth, from seasoned experts and government officials. During the week, children will also work on a group project that they will present on the last day of camp. Parents, if you’re looking for a virtual, safe and educational activity for your child to participate in this summer, look no further — the 2021 Legal Eagle Summer Camp is the activity you’ve been searching for!

Please note, in order to participate in this virtual camp, participants will need to have either a laptop, tablet or computer and an internet connection.

In 2010, he was the youngest elected official in the State of Maryland. As a strong advocate for student achievement and activism, Mr. Burroughs believes that all students can excel with the proper support, guidance and resources. He graduated from the University of Maryland Baltimore County, majoring in political science.

Juanita Galbreath, who formerly served as a member of the Federal Senior Executive Service under both the Bush and Obama administrations, currently serves as a senior vice president for strategy at Pivotal Practices Consulting. Juanita holds a bachelor’s degree from Austin Peay State University and an MBA from Syracuse University. She is a graduate of the Leadership Maryland Program, the Army Comptrollership Program, the Department of Justice Senior Executive Service, the Candidate Development Program and the Harvard/IBM JMDP. In addition to her work at Pivotal, Juanita provides instruction to federal employees government-wide on more than 30 topical areas ranging from appropriations law to quantitative and qualitative analysis; and serves as a vice president for the Board of Directors of the Center for Watershed Protection.

Ninah Jackson – PGCPS Board of Education, Student Board Member

Delegate Lewis was appointed to the Maryland House of Delegates on Feb. 10, 2017. He was born and raised in Maryland, attending Charles H. Flowers High School. He also attended the University of Maryland, studying government and politics for his bachelor’s degree, and obtained a master’s degree in public policy. Delegate Lewis also is a community organizer.

Delegate Lewis currently serves on a number of committees, including the Appropriations Committee, the Joint Committee on Legislative Information Technology and Open Government, and the Legislative Black Caucus of Maryland.

Januari McKay currently serves on FBCG’s Civic Engagement Ministry. She has a background in community organizing and youth advocacy. She is a youth advocate in the Washington D.C. Metropolitan area, with over 10 years of experience in the field of youth development, sexual and reproductive health, and organizing. She has worked with various national and community organizations leading the fight in HIV and developing young leaders. After contributing years of service in this field, God has called Januari to use her personal and professional experiences to work more closely with young people providing direct services. Ms. McKay is dedicated to advocating with and on behalf of young people. Her mission is to improve the quality of lives in our most marginalized and oppressed populations through education, advocacy and social change.

All times are in EDT.

All times are in EDT.

WE CAN’T WAIT FOR YOU TO JOIN US!